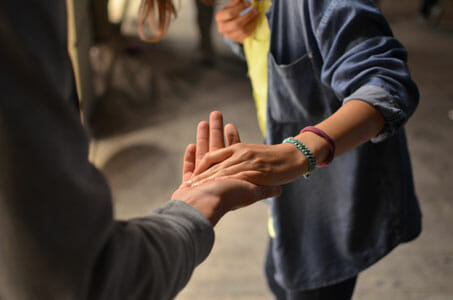 Codependency is a term that derives from addiction therapy. It is used to describe a repeated pattern of behavior which produces pain and is caused by a sickening and alienating relationship with an active addict.

However, nowadays it is used to describe a pattern of behavior that consists of forgetting one´s needs and focusing on the needs of the other. This can seem innocuous, but is a frequent cause of anxiety and suffering. That’s why in this article we’ll explore what codependency is, how it influences in anxiety, what causes it and how you can overcome codependency.

What is Codependency and how does it influence Anxiety?

Codependency is a problem that consists in difficulties in recognizing your own limits and needs and having an excessive focus on the needs and emotions of others. A codependent person can sacrifice themselves completely only for the other person to feel better afterwards. That’s why codependent people can be in very unbalanced relationships and in jobs in which they are exploited, without even realizing it. This causes them to become slowly exhausted to the point in which they can fall into a deep depression or end up with a high level of anxiety. Codependency could also be called a constant over-adaptation.

Codependent people don’t have personal limits in many areas of their life. They’re very sensitive and sensible towards emotions of others, to the point that they can absorb them like sponges. They feel other people’s emotions as if they were theirs. Also, they have an Ego that is so debilitated that they think that the emotions of the people around them are caused by something they did. For example, when someone is angry or sad, they can quickly think that this is their fault. As a result they will apologize or go out of their way in order to be liked again by the other person.

The codependent person does all this in order to feel good. Since it is difficult for them to recognize what they need and to connect with what they feel, they prefer to take care of somebody else so that at in that way at least the other person is feeling well. By seeing that the other person is feeling better, they can forget the pain they’re feeling inside, and think that they are actually feeling better as well. This is the main “benefit” of codependent behavior.

Many codependent people experience very intense emotions but try not to let these affect them. At this point, their body oftentimes starts to convert these ignored emotions into physical symptoms. That’s why many people who suffer from codependency suffer from “weird“symptoms that nor doctor nor the person itself can find an explanation for.

Codependent people tend to be people with many social skills that make them likeable, causing them to be accepted easily by the people around them in most cases. Nevertheless, they usually establish unbalanced relationships in which the other person is the “weak” person and the one who “needs my help” and the codependent is the “hero” and the person who will solve their problems.

On the other hand, these social skills quickly dry out in the moment that they have to defend their own rights or needs. They have great difficulties in saying no when someone asks them to do something, even if what is asked is completely unreasonable. They are usually people who literally will be there for you “when you call them in the middle of the night”. They are capable of sacrificing their needs completely if they know that the other person will feel better because of it.

In the same way, they have a tendency to avoid conflicts. Any conflict, however small, is a threat which can cause them to lose the other persons approval completely in their opinion. This is why they are able to endure very serious and negative behavior from the people around them.

All this causes many codependent people to be or to have been in relationships in which their values or limits were not respected, since they themselves have difficulties in recognizing and defending them. Yet the fear of being abandoned is so intense that it can be difficult for them to leave these relationships. This is also the reason why many people with codependency are always in relationships. Being alone causes them a lot of anxiety and sadness. It is difficult for them to be alone because they don’t understand their existence if not through their relationships with others.

On the other hand, the focus on the other one can be so big that the moment they try to break free from the rigid pattern they’ve created, in which they leave no space for themselves, for example by dedicating time to themselves, they feel guilty.

Furthermore, when another person breaks their scheme by helping them, it can be difficult for them to accept that help. To get out of their comfort zone and step out of their role as “coach” or “hero”, and to accept the intimacy and help scares them; for them it is a weak position to be in. A very important effect of this is that others see the person as self-sufficient and sometimes even as stand-offish. This causes codependent people not to receive help when they need it. Something that also influences here is that codependent people find it difficult to identify that they’re feeling bad, why they’re feeling bad and that they would like to receive help. Sometimes all this can impede a relationship from advancing. The fact that they don’t ask other people to really get involved and that they themselves are very much involved, can cause the other person to lose interest or not see the need to do get involved in the relationship.

We’ve seen that codependent behavior has many negative effects. What causes someone to forget themselves and to dedicate their existence to other people without even thinking about it?

Codependency is usually caused in infancy or adolescence. It starts off as a strategy to survive and cope with stress or tension over a prolonged period of time. People who suffer from codependency have usually suffered from physical or psychological abuse, or lived in unstable home situations. When your limits are constantly violated, or when you don’t know what’s going to happen any single day, it becomes difficult to know what to do in order to survive and to be accepted. The limits between what is wrong and what is right become unclear, something that causes a lot of stress in a child.

In order to lower the anxiety that is caused by all this, the child learns one single way to receive positive reinforcement: helping others. For a child with a lot of internal anxiety this can become their main source of self-esteem. To be important for others becomes the equivalent of feeling good. To be their guide in life is their only way to bolster their fragile ego.

It also oftentimes occurs that the child has suffered separations in infancy. A separation around the age in which the child still perceives the world through the so-called “magical thinking” can cause the child to think that it was (partly) their fault. At the same time, the separation can cause the child to develop fear of abandonment, which can cause him to try and behave in a way that will make their parents come back. This conduct can be the beginning of codependent behavior.

People with codependency have learned to over-adapt themselves. They do this in order to make sure that other people feel good and in order for them to accept them. This causes a great level of inhibition in them. They become so sensitive to what others want and to what they want from them, that they become able to adapt themselves like a chameleon. They inhibit their spontaneity, their needs, and sometimes even their normal way of being, all so that they will be accepted and loved. This causes them to experience a high level of internal anxiety.

How can you overcome Codependency?

In order to overcome codependency you have to:

Learn to turn to self-care, to stop when you need to. To say no when something doesn’t appeal to you or doesn’t suit you. To identify your own needs and emotions better. To accept help from others and to establish more balanced relationships in which you can also be supported when you need that. And above all to face situations that cause you to feel wrong and not to fear conflicts. To know that when you stand up for your rights and defend your limits your relationships can become way more enjoyable. You have to learn that criticism doesn’t define you as a person but that it can be an opportunity to grow.

Try to let other people listen to you, to let them advise you and take care of you. You don’t always have to be the “strong” person. Learn to accept intimacy and help. You’ll see that it is a necessary process and that it’s the only way to really become a strong person.

This all can help you overcome codependency and anxiety, however it is not easy.

Liquid Modernity and its role in Neurosis

What are the most common causes of OCD?