Fear of death is an existential fear that has always been present. It is a fear that affects all people who reflect on their presence in this world. To think about death indicates that we have an elevated consciousness which allows us to step out of our routine and to consider what we’re contributing to our community and what mark we’re leaving behind.

However, this contemplation can become a problem the moment that fearing and reflecting on death become our main occupancy throughout the day. This is what happens when someone suffers Fear of Death OCD, or OCD related to the fear of death (also known as death phobia or Thanatophobia).

How is Fear of Death OCD cured?

What is Fear of Death OCD?

What are the causes of Fear of Death OCD?

How can we help?

What is Fear of Death OCD?

Fear of death OCD is a type of OCD in which obsessions are focused on the subject of death.

People who suffer from fear of death OCD think about and reflect on death all day long. It impairs their ability to do their job or to concentrate on their studies. They can think about death for hours. Usually, they investigate the subject a lot, by looking up articles and information on the internet. The fear is so intense that they can suffer panic attacks and that they can start to avoid many different situations which could be related to death.

“Is there life after death?”

People who suffer from fear of death OCD are afraid of what comes after death. It terrorizes them that they don’t know if they’ll exist in any form or not. They are also worried about ending up alone instead of with their loved ones. They can ponder whether heaven or hell exists and if they do where they would go. Another important reflection for them is to contemplate whether God exists or not, and if they should change their life both if he exists as well as when he wouldn’t exist. 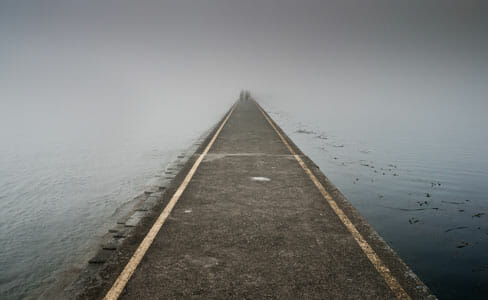 “What is the meaning of life?”

In the same way, they can think a great deal about their existence and whether or not there is a meaning to life. This fear is one of the most important fears in this disorder and as we’ll see later on, the most crucial in its healing process.

Another fundamental fear in fear of death OCD is the preoccupation with what the actual process of dying will be like. Patients want to know if they will suffer, if it will be painful, if they will be alone or not, if somebody will take care of them. If there will be someone who will aid them in the transition from life to death. What causes them most fear is the fact they don’t have any control over the process. That’s why they try to control it beforehand.

Likewise, they tend to think a lot about what their funeral will be like. Who would attend, what music would be played, how their passing would affect the people who would assist, what would be said at their memorial service. There is a component of narcissism in all this, but this kind of narcissism is usually caused by a low self-esteem.

“What will happen after I die?”

Another important subject people who suffer from fear of death reflect on is the impact of what they’ve accomplished in life. They are afraid they won’t be remembered and that they won’t have meant anything to others. This fear is also key in the treatment of fear of death OCD.

People who suffer from fear of death OCD can become highly sensitive to the sensations in their body, as well as to certain signs in their environment. Any irregularity is quickly identified as their personal death omen. This fear is highly related to hypochondria. Its causes are usually the same and it’s not uncommon for the two fears to be present simultaneously. Visits to doctors are frequent and at times repeated unnecessarily.

Since the fear of death can become very intense, avoidance can become a common kind of behavior in the person who suffers it. Patients can avoid places and events which are clearly linked to death, such as funerals, funeral homes, graveyards, but also places that are less clearly related such as hospitals and/or churches. Patients can be afraid to encounter spirits or ghosts. Others avoid places where they know people have died, or they avoid sick people because they’re afraid they might die.

They can stop watching crime series, thrillers, or other series in which death plays a central role. It is also common for them to avoid documentaries about the universe, the cosmos or other subjects which make them contemplate their existence.

All this is done with the objective of trying to forget about and deny the certainty that their death is inevitable.

In their daily life they can quit activities which are “dangerous”; that is activities which could cause death, such as driving or flying. However, this danger can be perceived more and more widely until the point they won’t get out of their house. This paralyzes them vitally in a way that their own inactivity and immobility justifies the fact that they are actively trying to change their life.

Thus, the most important kind of avoidance is the avoidance to live their life. 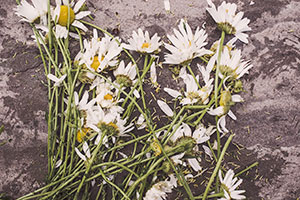 There are several motives which could lead to fear of death OCD. There are antecedents that can be the detonating factor like for example accidents or sudden deaths in the family. These kinds of events obligate us to some degree to reflect on our role in the world. Since they affirm that life can be short, they force us to take the reins of our life and to fulfil our own destiny. This can generate a lot of fear in people with fear of death OCD due to the fact that they usually have many interior barriers which stop them from taking the necessary measures to reach it.

On the other hand, sudden deaths awaken our fear of being abandoned. To face the possibility that we can end up alone makes us conscious of the fact that we are responsible for our own life. This makes us mature more quickly and leads us to be more independent. However, many people who suffer from fear of death OCD keep on a living a life in which they are highly dependent on other people.

Thus, fear of death OCD is highly related to the fear of not fulfilling ones destiny. People who suffer from it have an empty existence. That is, what they’re doing is not transcendent to them. To not live, symbolically makes them dead while they’re still alive.

Fear of death is also highly related to the fear of not being important to others, to not leave a mark on their life. Therefore, as we’ve seen before, to fear death is to fear that your life is not significant. Hence, a fundamental part of healing this fear is to make the person’s life significant to them.

Another important cause can be the disconnection to the world and one’s peers. This happens frequently to people who suffered bullying. They feel cut off from others and they don’t feel like they’ll be accepted by their peers. In a way, their thinking about death masks their desire to know if they are actually valued by the people around them. The question is “If I would die would you love me?” In this case there is a wish to be more integrated in their community. That is what should be reached in order to lower their fear of death.

How is fear of death OCD cured?

In therapy we strengthen the person’s independence in order for them to be able to decide about their life freely without worrying about what others might think. Also, we’ll help the person to develop a strong sense of community.

The archetype of death is related to the energy of Thanatos, the energy of destruction. This energy instills fear in us because we associate destructive energy with death (or the end). For example, when we leave a job we can think that this will cause us to become broke. However, when we destroy something, we create space; space to live. This is the symbolical meaning of fear of death OCD, and to create this space is our goal in its treatment.

If you would like to read more about AFOP®, the method we use to treat fear of death OCD please click on the following link:

If you would like more information about fear of death OCD or if you’d like to Schedule a first session you can call us at + 34 935 282 353 or contact us through info@ipitia.com.