Many articles have been written about OCD. However, the majority of the people keeps on associating OCD to people who wash their hands or have the need of organizing or cleaning things. However, there are many other kinds of OCD that are as or even more frequent. This is why we’re launching this informative campaign about different kinds of OCD. The last subject of the series is Religious OCD or Scrupulosity.

What is religious OCD?

Religious OCD consists in a profound fear of sinning, committing blasphemy or not being good enough as a person. People who suffer from religious OCD continuously worry about having “bad” or “impure” thoughts. They can fear not ending up in heaven, or being judged by God for anything they do. They belief in a severe God, who they are convinced will condemn them for their behavior and inner thoughts. Also, some fear becoming possessed by the devil if they don’t have “enough” faith or if they “sin” too much.

People with religious OCD are highly preoccupied with justice and they can be determined to always behave “correctly”. This places them under a lot of pressure because nobody is able to always behave 100% correctly. Moreover they can worry about their behavior and about whether or not they have acted properly. In social situations this can cause them to fear having lied even though they didn’t or that their intentions weren’t positive or “pure” when they give a compliment to somebody.

They can also suffer from intrusive images. For example they can see images of themselves sinning or they can see sexual images related to religious figures, both of which can be highly distressing for them.

Furthermore they tend to have difficulties taking decisions due to the fact that they doubt whether their situation is according to God’s will or whether they are allowed to do something to change their situation. For example they can doubt about if staying in a bad relationship is God’s will or if they’re allowed to get separated and choose happiness. Sometimes they think that suffering is part of life and that it can even help to purify yourself and to grow. This can cause them to stay in a situation that makes them unhappy for a long time.

What can cause religious OCD?

Every person and every child need a frame of reference in life; a structure that helps them to understand the world. People who suffer of religious OCD often haven’t had this structure. Many of them have seen violence between their parents, alcoholism, or have been neglected. Others have suffered sexual abuse by people who they had held in high esteem until then, like family members, friends of the family, or people who are in position of power (teachers, priests, sport coaches). These situations can cause a huge level of internal anxiety in children and oftentimes intense feelings of guilt.

All these situations are transgressions of boundaries. They are situations in which the child doesn’t know how to react because they hold no logic to them. Situations in which they don’t know how to nor can defend themselves. There is no example or an ethical guideline. On the contrary, oftentimes there is an obligatory silence around what happened, an “omertá” which forces the child to stay in the same situation. Usually this “omertá” is accompanied by the constant threat of hurting somebody they love or losing the esteem of their environment. This causes the child not to be able to share their experiences in order to compare their situation to more healthy situations and improve the situation.

Since the child hadn’t had any kind of structure at home and hasn’t been able to learn a moral code from his environment, the child starts to need a very rigid structure to compensate this. They need somebody to guide them with their behavior because they themselves have difficulties to decide what’s right or wrong. They find this structure in religion. Likewise, they need religion in order to understand and give meaning to what happened to them. That’s why the child symbolically transfers the paternal power to God. However, due to their internal anxiety and their lack of values, this act and religion itself becomes another source of anxiety for them.

In the same way, one of the causes of religious OCD is overprotection. Children who grow up in an environment where they haven’t had any kind of freedom tend to grow up as scared children. The fact that their parents or caretakers don’t allow them to face life and difficult situations by themselves causes them to grow up with excessive fear. This form of parenting doesn’t allow them to develop a strong and powerful psyche, that leads them into a search for an external structure, which they find in religion. Nevertheless, their excessive level of internal fear converts this search into an obsession.

Religious OCD also presents itself in extremely religious families. Since the child grows up in a morally rigid environment and is surrounded by an excess of rules and norms, the child experiences the world through a rigid framework. They are not able to establish their own judgment, due to the fact that free thought is disqualified in their family. That’s why any situation in which they have to rely on their own judgment can become a real torture to them.

Sometimes religion itself can instill fear in the child, since they cannot grasp nor rationalize concepts such as an all-seeing and almighty God.

There are also people with religious OCD whose feelings of guilt about past experiences cause them to generate thoughts about the fact that God must be angry at them and thinks they need to be punished for what they’ve done.

Finally, an important factor which maintains religious OCD in adulthood is that due to the lack of values and structure, many people with OCD haven’t found their place in life. Some might have even renounced their needs and desires completely.

This causes them a lot of internal anxiety and in turn an increase in obsessions and/or compulsions. 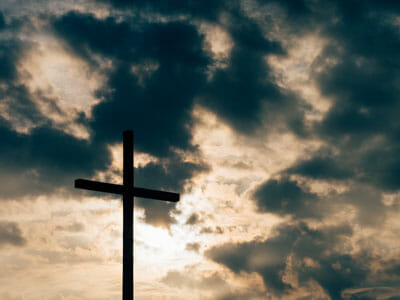 How can you overcome religious OCD?

Overcoming religious OCD is a delicate process. You have to respect the religion of the client profoundly while at the same time working on making their internal rigidness more flexible. You have to help the client to generate their own values, and expanding their viewpoints. It is important that the person establishes a fair judgment which they feel comfortable with.

Mindfulness can be a useful tool in the treatment of religious OCD as well, since it can help the person to distance themselves from polarity and severe judgment, as well as to learn how to relax and be more present.

Also, it is essential to help the person to process their traumas and free them from any guilt they might feel.

Furthermore it is important to help the person to generate enough strength in order to change the areas of their life they are not happy with, such as their job, relationships, or life goals.

We help the person to be able to reconnect to passion and liberate themselves from their suffering. To know what they like and what they don’t like, without being judged or judging themselves. We help them to channel their vital energy in order to be able to conquest goals in the real world.

You could say the goal of the treatment is to help the person find out who they are without their rigidness and forced-upon values, a process to which C.G. Jung referred as individuation.

In summary, the treatment is a curvy road which leads the person to reconnect to their essence and their capacity to enjoy life.